Contact (custody) cases are often a balancing act.  An English or Welsh Court will primarily have regard to the overriding objective in all England and Wales family law cases, which is: “what is in the best interests of the child”. This includes consideration of a list of factors including the baby or child’s physical, emotional and psychological health. Some guidelines in Scotland may differ.

The Court will consider the wishes of both parents to have contact with their child, alongside what is appropriate for that infant at that time.  When a child in a contact case is breastfed it can add another layer of fact and wellbeing into the mix. Breastfeeding is an intense and enormously important part of a mother-child relationship and it can be very distressing to be told that it may have to be compromised to fit in with contact with the other parent.

While LLLGB cannot offer legal advice, we can offer support with any breastfeeding difficulties and provide information which may be helpful. See Further Reading for some useful links.

What is taken into account?
Separation study
Attachment theory
The human right to breastfeed
Possible negotiation
The health significance of breastfeeding
Arguing against breastfeeding
Will breastfeeding have to end?
How LLL can help

The Judge will determine what contact is considered is in the best interests of a child, and the decision is governed by criteria set out in various acts of Parliament.  Breastfeeding may be taken into account if the child is under one, although sometimes formula has been considered an acceptable alternative.

Some Judges and court officers (such as CAFCASS officers or Guardians) are not fully informed about the physical, emotional and health significance of breastfeeding, as well as about the differences between breastmilk and formula.
Each Judge will make a unique decision on the individual circumstances of the child or children in that case. In some cases some mothers have been able to successfully negotiate delayed overnight access for their child.  Providing research to show why overnight access could be distressing may help. 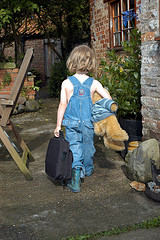 A Study which may be helpful was done by US researchers at the University of Virginia, July 2013. The researchers set out to discover what happens when babies under 12 months old spend a night or more per week away from their mothers, as increasingly happens when separated parents share custody.

They found that such infants had more insecure attachments to their mothers compared with babies who had fewer overnight stays or saw their fathers only during the day.

Lead author Samantha Tornello, a PhD psychology student at the University, said attachments during the critical first year serve as the basis for healthy relationships in adulthood.  She was reported as saying “Judges often find themselves making decisions regarding custody without knowing what actually may be in the best interest of the child, based on psychology research.’

(The findings were published in the Journal of Marriage and Family, based on data from the Fragile Families and Child Well-being Study of about 5,000 children born in US cities from 1998 to 2000. Parents were interviewed several times and children were assessed at ages one and three.)

Many well-respected psychologists and scientists have written about Attachment Theory. This Theory was developed in the 1960s by British psychologist John Bowlby (http://psychology.about.com/od/profilesal/p/john-bowlby.htm). He showed that babies need a primary care figure to form an attachment to and that this is important for emotional security.  For a young child this often means they need to be with their mother and to be able to breastfeed for comfort as well as nutrition. More recently both Dr Margot Sunderland (Director of Education and Training at the Centre of Child Mental Health London http://www.margotsunderland.org/) and Sue Gerhardt  have written about this.   Providing information about Attachment Theory may be helpful.

The human right to breastfeed

A legal provision which might be worth emphasising is Article 8 of the European Convention on Human Rights (ECHR), which describes the right to respect for an individual’s private and family life. A baby, like all human beings, has a right to “physical and moral integrity” (covered under the concept of private life, according to the European Court of Human Rights), which might include the continuing physical and emotional significance of breastfeeding. It is possible that a disproportionate interruption/disruption of nursing and/or time with mother could arguably be a breach of that right.

The first step in any case would be to try to negotiate with your partner a contact arrangement which takes account of the breastfeeding relationship.  A mother may be able to negotiate a shared parenting plan that takes into account breastfeeding, with the understanding that it would be flexible as the child grows. A solicitor can make any agreement a legal document.

If you can’t negotiate it’s really important to get a solicitor you feel will listen to you and who understands the importance of breastfeeding. It may be assumed that a woman may be more sympathetic than a man but this is not necessarily the case. It is absolutely fine to take initial advice from more than one solicitor, until you find the person who represents your views and position in the best possible way for you.  Solicitors will often offer a free initial consultation so that you might decide this.

Where the breastfeeding relationship is a mother’s priority it may be necessary to compromise on other issues. Unfortunately, making breastfeeding the sole issue can sometimes be counter-productive. Dividing up issues and dealing with one at time may help.   Keeping calm may be difficult but getting angry can hinder negotiations.

The health significance of breastfeeding

Not breastfeeding results in increased health risks to both mother and child, both short-term and long-term, physical and emotional.  It can be helpful to have a knowledgeable paediatrician speak up about why breastfeeding is of such importance.  There is a lot of helpful information on the internet which can be useful to give to a lawyer to give them a better view of why you parent as you do.

Here is a list of some things which may be helpful in demonstrating the importance of breastfeeding.

The difference between breastmilk and formula

The significance to the immune system

The significance to a child’s health

The effect on a mother’s health

The effect on emotional health

Mothers sometimes have to contend with the suggestion that they are continuing to breastfeeding to fill their own needs and to control their child.  It may be suggested that there are no benefits for the child. It’s possible that in making breastfeeding the main issue a judge could view this as an attempt to interfere with the rights of the other parent.  It is sometimes claimed that the breastfeeding relationship can or should be curtailed, with the mother being portrayed as leading an alternative lifestyle which is affecting her child; or as being overly attached to her child.

Katherine Dettwyler, PH.D., Department of Anthropology, University of Delaware, Newark, DE, has written an open letter to be used in court cases which clearly sets out the biological norm of breastfeeding. You can read it here.

It may be possible to turn this argument around and ask the other partner to provide evidence which shows good reason why breastfeeding is not beneficial.

Will breastfeeding have to end?

When a breastfed child has contact time with her other parent it doesn’t mean breastfeeding has to end.  Depending on the child’s age a mother may be able to talk to her about the situation and help her to cope with a new routine, if it comes to it.  If a mother can be positive about the change and present it as an “adventure” where the child will be doing things with the other parent it can help to ease the transition.

Children are surprisingly adaptable in their nursing habits.   Even young babies whose mothers go back to work and leave them for many hours have been seen to adapt so that they sleep and do not feed much while mum is away, but make up for it when she comes home.

Some women have told us that they have gone away for a few days and their older breastfed child has been perfectly happy while they are away, but has returned to the breast when they returned.   Sometimes a mother has suddenly had to be separated due to family illness or going into hospital and an older child can understand this.  They can have an ability to understand when mum is not there to nurse them and a different routine with the other partner.

It may help to explain that when she gets home you will be there waiting with (her name for nursing).  Some children will need to nurse a lot more for a while although others may need gentle encouragement to continue nursing. Although this is not ideal it will hopefully make it possible to continue your nursing relationship.

How LLL can help