My breastfeeding journey started nearly 16 years ago when I had my first child, Dylan. He was a much planned for baby, despite the naivety of only being 20 years old myself. My family wasn’t very pleased and I didn’t know any other mums with children: when I went to antenatal sessions or playgroups I was always the youngest person there by about 10-15 years, so I stopped going. Postnatal depression hit me hard and the reality of motherhood was not what I expected. Slowly, friends stopped calling round, as I had a new set of priorities at that point. Yet, even in my darkest moments, when I felt so low that I would pray for death to take me, I managed to cling onto my precious son and promised him that I would never leave him, taking it day by day.

I assumed I was doing everything wrong because of the dirty looks that a young girl with a baby gets given. My mother-in-law told me that breastfeeding was only necessary for six weeks or so (that is when she had stopped); my mother had also fed me for 6 weeks and then switched to a bottle, having been told “it’s the same anyway”. Yet, something instinctively within me knew it wasn’t the same, and I remember thinking ‘if breastfeeding is natural, then even if I mess everything else up with motherhood, at least I can do this right’. So we stuck it out despite mastitis, sore nipples, lack of any support and poor advice. My mother got upset because she thought I was questioning her parenting choices. My mother-in-law got upset because I was proving it was possible where she hadn’t. But my baby was happy and I enjoyed it. I set myself the goal of six weeks, which quickly came and went in a blur; by six months the pressure was building to wean him, although I am proud to say we stuck it out a few months longer.

I can confidently say that breastfeeding eased me through my postnatal depression and into the crazy journey of parenting. As the fog lifted, the bundle of craziness that I found myself with was incredible and the more I learnt, the more I wanted to learn. In fact, I could say that Dylan was the inspiration for my career change, when I became a breastfeeding supporter and, eventually, a midwife.

My next son, Kai, came along fairly soon after, and this time I was determined to make sure things would be different for us. I armed myself with every scrap of information I could find. I hired a doula, had a home birth, and built up the confidence to attend local groups. My health visitor noticed I was one of the few women who was breastfeeding and asked if I wanted to go 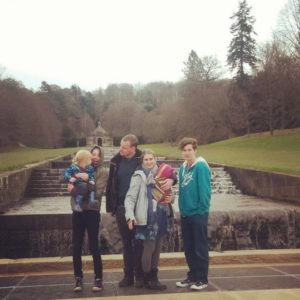 attend a Sure Start ‘Breast Buddies’ group. It was a small step, but a big one. Everything about breastfeeding and the parenting ethos resonated with me and I soon trained to be able to teach the course to new mums and support other breastfeeding mums in the community. When a job opportunity came up at my local hospital offering breastfeeding support on the postnatal wards, my mum encouraged me to apply; even though our breastfeeding journeys had started so differently, she could see how passionate I felt about it.

By the time my third son, Charles, came along 10 years later I was a trained nurse and, when he was six months old, I decided to start my midwifery training. He had an undiagnosed tongue tie and I felt immensely guilty for being away from him when he was so young. Even though we couldn’t afford it, we employed a nanny to care for him whilst I was working 60 hour weeks so he could still have a ‘mother figure’. I aimed to express at least once a day for him (ideally 2-3 times), but I had a manual pump, busy shifts and nowhere private designated to express whilst on placements. Every new placement meant a new discussion about the fact that I was “still” breastfeeding and I encountered very different attitudes from my colleagues: some midwives were breastfeeding their own children till natural weaning, while others were disgusted by the simple idea of using the work fridge to store my milk. The award winning breastfeeding room I was able to use at the university was contrasted by a cupboard or kitchen or wherever I could find at the hospital. I struggled a bit to keep my supply up, but we stuck with it and weaned just recently at nearly four years old. Charles was rather obsessed with “mupsan” – his word for milk – which comes from a combination of ‘mum’, ‘up’ and ‘some’ from when he was a baby. We would make the most of our time together by snuggling and feeding, which eased my guilt of being away so much: this was the one thing I could do for us and it became an intrinsic part of my parenting. 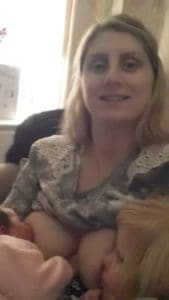 y is called Rose: we had a home birth under the care of my colleagues and were privileged to enjoy 2-3 hours of uninterrupted skin to skin contact, bonding and breastfeeding. Tandem feeding Charles and Rose was a new experience and the LLL book “Adventures in Tandem Nursing’ was a life saver for me! Weaning Charles didn’t quite feel right to me because I wanted him to welcome his sibling rather than think her arrival was when his ‘mupsan’ was taken away from him. However, I had a rather strong nursing aversion which started during pregnancy and continued after Rose was born, so I decided to reduce Charles’ feeds, keeping breakfast and bedtime feeds only.

I went back to midwifery when Rose was 13 months old and I continue to express when I work 12 hour shifts, now having the confidence to seek out a peaceful retreat within the hospital. Rose is quite happy feeding all day (and night) and has a bottle of expressed milk from her childminder when she is away from me. I have also expressed over 3 litres for the local milk bank – having upgraded my manual pump to a double electric pump was worth the investment!

At this point, my older sons are some of the biggest breastfeeding advocates I know! They completely appreciate breastfeeding as an expected part of parenting and when they talk about it I beam with pride at how it is so normalised in our household, as well as in our wider circle of family and friends!
Deborah Hanson, LLL Birmingham
This article was originally published in issue 218 of Breastfeeding Matters
Copyright LLLGB