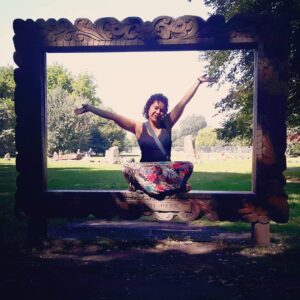 At the top of my to-do list when I was pregnant with Amaya, my second child, was to find a breastfeeding group. I stopped breastfeeding my son when he was four months old due to the challenges I faced with a lack of support. I was the first person in my family for three generations who breastfed through choice. My mum breastfed my brother and sister as she could not afford formula. I grew up hearing how painful it was and how much she hated it.

Midwives and health visitors suggested formula top-ups when my baby’s weight dropped; it was as painful as my mother had described and none of my friends breastfed. Switching from breastfeeding to formula feeding was the hardest thing I had to do. It was devastating as it did not feel like a choice, and I knew it was not best for him. He loved to breastfeed and got visibly excited when he was about to feed. He snuggled in once he was full and was clearly content, but I could not go on any longer. I had no idea about exclusive expressing at the time.

This time I was determined to do things differently. I already had a lovely supportive network of friends, a lot of whom breastfeed past infancy. I had read The Womanly Art of Breastfeeding, and I was prepared. I had researched our local LLL group, which had started up in the town next to where I live.

Now, I usually would not attend baby groups; they are not my thing. I live in a lovely area in South Wales; however, it is not very diverse. The reason I mention this is because I have always felt like the odd one out here. Usually, when I go to a group with my son, there is a series of questions that I have to answer before I even manage to sit down. “So, where are you from?”, “Oh, you are Welsh! Where are your parents from?”, “Have you lived here long?”, “Oh, that’s a very interesting (or sometimes ‘exotic’) surname. Where does that come from?”, “How do you say his name? Oh, I will never be able to say that!”. I have often walked into a group with a friend or two and been the only one being bombarded with questions. Or I get led to the seat next to the only other non-white mother or person whose first language is not English. 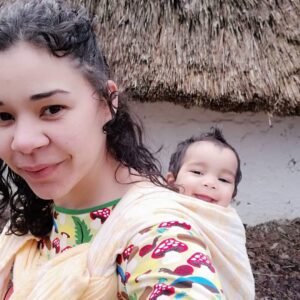 For me though, it is the touching that puts me off groups. The hair touching or the stroking of my son’s skin whilst commenting on how beautiful his complexion is. Now I know I sound like I’m exaggerating, but some form of this happens to me in almost every new situation I enter. It always has, and I am not the only one. The majority of non-white people, or people who were not born in Britain, that I have spoken to about this have had some form of being “othered” or made to feel different. We joke about it between ourselves. We do this because if you don’t laugh, you will cry or get really annoyed. Most people understand that it’s only ever meant in a nice way, and that the people who ask the questions or touch our hair are trying to make connections but are not sure quite how to do it.

This said, I knew I needed to go to a group if I wanted to get good breastfeeding support, so off I went.

I had decided to have a “babymoon” with my second baby. I had done way too much with my first, and I paid for it. I was very ill after his birth, with an infection that took five months to recover from. This time I only left the house during the first two weeks for the breastfeeding group and my weekly Welsh class. After that, I also did school runs, but for the following two weeks, that was it. I limited visitors and made everyone aware that my house would not be perfectly clean and tidy, and that I was resting and adjusting to our new family.

I went to my first LLL meeting when Amaya was five days old. I was not looking forward to it, but she had already lost more weight than I was happy with, and I knew I needed to go. I made a point of doing my make-up, putting on nice clothes, choosing a lovely outfit for Amaya – who didn’t have a name yet due to my partner’s culture, as they wait for a ceremony to be done by a priest before a name can be chosen. I was worn out before I had even left the house.

When I walked in, I was greeted by our local Leader, Johanna Rhys-Davies. She came to the door and opened it for me to get the pushchair through. I remember how lovely and welcoming she was. She asked our names and didn’t make any comment about me not naming Amaya yet. 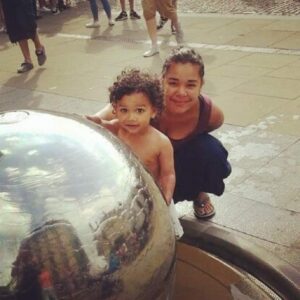 She asked how old my baby was and commented on how alert and content she seemed. Johanna walked into the room with me and introduced us to the circle of women and babies. This was lovely, as I really feel uncomfortable walking into a group of people for the first time. She asked me what I would like to drink then said for me to sit down, without choosing my seat for me, and that she would be back shortly with my drink. Before popping to the kitchen, she introduced me to another mum with a newborn baby.

After everyone had chatted for about ten minutes, Johanna did an introduction. She then asked everyone to introduce themselves and say how they were doing this week. It was such a relief, as it didn’t feel like I was the new person but just another mum in a group of friends. It was so nice to be surrounded by other people, some of whom had found breastfeeding hard but had overcome their challenges and were now feeding easily and freely. I mentioned Amaya’s weight issue and was given a lot of helpful suggestions from several of the mums. Once everyone had offered their thoughts, Johanna also explained what breast compressions were and how to do them. When we were about to leave, Johanna handed me a few leaflets and made it clear that if I needed anything before the next meeting I could message her or ask on the local LLL Facebook group.

After Amaya’s next weigh-in, and finding that she had lost more weight, I got so much support from Johanna and her co-Leader Trish Bennett, who was just as lovely and amazing with helping me find a position that was comfortable. I was supported through expressing to give Amaya top-ups, healing very sore nipples, and getting her assessed and treated for a tongue tie.

I have attended the group almost weekly since Amaya was five days old. She gets very excited now when she realises where we are going (possibly because of the amazing flapjacks). I have made some very close friends, and not once have I felt out of place. It’s also lovely walking through the town and knowing so many people just because we met at the breastfeeding group.

When Amaya was about 11 months old, I was asked if I had considered becoming an LLL Leader. I hadn’t, but after looking into it, I decided it was something I would love to do. Completing the application was such a great experience. I learnt so much, not just about breastfeeding but about communication too. I am now a co-Leader in the Vale of Glamorgan group with Johanna and Trish, and I feel very privileged to have such knowledgeable and kind women in my life.

Amaya is now two-and-a-half years old and breastfeeds about three times a day now. When I ask her why she needs milkies, she says, “It makes me happy.” It makes me happy too. 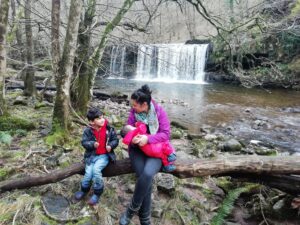