You are here: Home / News & Research / The reasons why night waking is a biological norm

LLLGB aims to provide families with accurate information about breastfeeding and parenting to enable them to make informed choices and consider what is best for them.

One of the questions new parents are often asked is “Is he sleeping through the night yet?” Because formula-fed babies are perceived as sleeping for longer, mothers with night-waking babies can feel pressured to offer formula to try to encourage longer periods of sleep.

Dr. James J. McKenna, Director of the Mother-Baby Behavioral Sleep Laboratory at the University of Notre Dame and member of La Leche League International’s Health Advisory Council,has stated in previous discussions about night waking that he wonders if parental expectations have been determined by social ideologies and social ‘wish lists’, which have little to do with who babies are biologically. By expecting babies to sleep through the night, parents are defining infant needs in terms of who we want them to become and notions as to how, for example, to make them ‘independent’ at young ages. 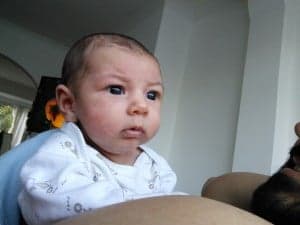 Night waking is caused by a variety of reasons

Dr. McKenna says that infant waking can be related to breathing patterns. Sleep apnoea (a temporary inability to breathe) can induce protective awakenings and infants who spend more time in deeper sleep do not arouse so easily in order to prevent a life-threatening apnoea. (i)

Dr. Mckenna adds that it is known that babies that die of Sudden Infant Death Syndrome (SIDS) likely had some kind of arousal deficiency (did not arouse sufficiently well enough). He states that externally induced arousals (sleeping near to mother) might also improve awakening skills; this is important “since infantile cardio-pulmonary perturbations are corrected by the infant arousing from sleep that leads to oxygenation. Arousing is an infant’s best defense against a range of potential physiological challenges”.(ii)

McKenna speculates that perhaps mothers evolved to induce arousals (to have their babies feed) as, for several reasons, lots of arousals may increase an infant’s chance for survival. It may also help protect mothers from a variety of diseases, including breast and ovarian cancers.  Dr. McKenna says infants are not always waking for food, but also for non-nutritive purposes, such as to be cuddled and touched, and possibly reassured emotionally. Night waking is often determined and/or regulated “by way of changing growth, metabolic and developmental caloric requirements, and likely by the infant’s own personality characteristics” (iii)

Frequent night waking to breastfeed poses a significant challenge to mother’s sleep, but feeding a baby formula milk which over-rides its instinct to wake could create other problems. 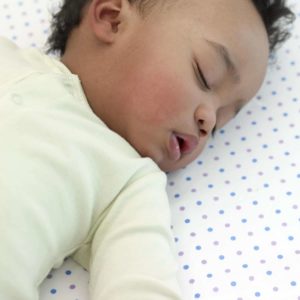 supply and help to avoid engorgement, blocked ducts and mastitis. Breastfeeding is sometimes blamed for a mother’s tiredness, but caring for a new baby is often tiring, independent of the way a baby is fed. It can help to try to sleep or rest when the baby does, even if it’s not a time when you would normally nap. Sitting down to breastfeed means you get a chance to relax and put your feet up.

Studies have shown that when mothers stop breastfeeding their fatigue level does not change. One US study also found that breastfeeding mothers averaged 40-45 minutes more sleep at night during the first three months than those formula feeding, even when fathers helped out with giving bottles.(iv, v)

While formula manufacturers can invest a lot of money into promoting their product and may suggest that it will help babies to sleep better, there are limited funds available to provide women with information and support about breastfeeding. Much of the support women receive comes from charities relying on voluntary breastfeeding supporters.

According to the NHS 2010 Infant Feeding Survey (IFS), breastfeeding initiation rates in GB remain around 80%, but there is still a very rapid drop-off rate. The majority of women who stop breastfeeding in the early weeks would have liked to continue longer and lack of information and support with initial difficulties is a key problem. (vi)

Given that the vast majority of women wish to breastfeed, there is a strong need for additional investment in breastfeeding support when women need it and a clearer understanding of the way breastmilk offers optimal growth and protection for babies.

When making decisions about infant feeding, it can help to know that it is normal for a baby to wake at night and how lots of arousals can in fact protect the baby. Understanding that “sleeping through the night” is something which will happen when the baby is developmentally ready allows women to make an informed decision without feeling pressured into introducing formula.