You are here: Home / Breastfeeding Matters / Something Cosmological

About three months after the arrival of our second son, I looked at my wife tandem feeding our two boys and had somewhat of a revelation. That moment profoundly changed the way I look at breastfeeding and, more generally, the world. Let me rewind a bit… Breastfeeding was always the goal when we knew our first boy was on his way. I’m not totally sure of what my wife’s exposure to breastfeeding was before she was pregnant, but Rachel is a kind, generous and loving woman and friend, so I knew she would be a caring mother.

I knew how supportive and nurturing we both would be. Bonding with our baby was of paramount importance to us and we already knew during the pregnancy stage that we wanted to try carrying him in a sling. We both attended NCT classes, including a session on breastfeeding. In hindsight, however, all the information and material I saw before our baby was born seemed quite simplistic, essentially implying it would all just ‘happen’ naturally.

Rachel was inspiring in labour. It was my first glimpse of her becoming what is sometimes referred to as an ‘earth mother’. It was also the first time that, despite my oodles of love and hands-on involvement, I felt a little removed from the process. I wasn’t physically giving birth. I was an assistant. Every so often I would sneak into the loo in the delivery room and sob – from happiness, wonder, thrill, and a little helplessness. Our roles in this journey were different and I didn’t have enough time back then to understand and frame this, especially given my emotional state.

Rachel was spiritually, mentally and physically in a zone and it was incredible to watch. When our son made his entrance into the world and the breastfeeding journey began, however, we realised things weren’t quite as simple as we were told. Rachel was rushed to the operating theatre due to a tear, and I got to hold our son alone for a few hours. It was such a beautiful early bond, but I was very aware that he was not spending those hours with his mother breastfeeding! When Rachel came back, the baby was not latching well and I felt like the clock was ticking with every hour that went by without him feeding as expected. People would be in and out, trying to assist, pushing nipples in his mouth, telling Rachel ‘Move here, try this, try that.’ I was calm at first, but as things dragged on I once again realised that, as a dad, I couldn’t do this for them. I started to wonder what my role in breastfeeding should be.

We spent a few days in hospital. Breastfeeding eventually worked out, our son became a well-latched, well-fed boy, and I adopted my role of supporting his mother in every way, shape and form I could. I would fetch food, make drinks, position cushions and get chocolate (crucial!). It wasn’t just physical support, though. On one occasion, we had family visiting and I was in the kitchen making a brew. One of them came in milling around. I asked why they weren’t in with the baby and they said ‘well, Rachel is feeding him, so…err… you know…”. I quickly explained how they would need to get used to the sight of breastfeeding and why it was important, handed them their tea and sent them back into the living room to join mother and baby. 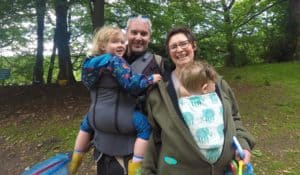 I took pride in supporting my wife to breastfeed. I started to hear other dads talk about switching to bottle feeding at night in order to be more involved and bond with the baby. I never felt that desire in the slightest, also because I had lots of opportunities to bond with our son while carrying him in a sling. I became a passionate baby wearing advocate too!

At around six months I started to think that breastfeeding would stop soon. Rachel quickly and respectfully explained to me that the World Health Organization recommends breastfeeding for a minimum of two years. Once again, I went from feeling uncertain to recognising the many benefits of breastfeeding for our son’s development. Why wouldn’t we continue?! It didn’t matter if it was for nutrition, comfort, or both.

When our second son was born I watched him and my wife flourish. I looked for new ways to offer my support. Seeing Rachel struggle with breastfeeding aversion and yet continuing to nurse our first boy was difficult, but prompted me to remind her about how far she had come. The pride I felt watching her give our boys everything she physically had, and the joy of seeing healthy, happy children grow thanks to her, prompted an idea for a gift. I took all the amazing breastfeeding photos we had amassed and made a large photobook (‘Rachel’s Milky Moments’) so that she could see the steps of her journey so far. It is a beautiful book!

Our daily life (and sleepless nights) went on, and then came my revelation as I watched my wife tandem feed… I call it my ‘hippy’ moment. Breastfeeding transcends our daily lives; it’s not just about nutrition for our children. It’s a universal bond with the cosmos, the very spirit and soul of the earth and the stars. There is a reason we call it ‘mother’ nature. When I see mothers breastfeeding I perceive an invisible energy that is binding humans to all things natural. Social changes, technology and our daily schedules often make us forget, but breastfeeding brings us back to that bond. It is both an inwardly intimate act and an outwardly source of connection through time, space and nature. As a dad, I am thrilled to assist the mother of my children in keeping this energy alive in the world.