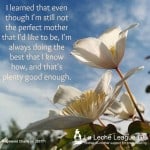 A new study, published 20th August 2014 in the journal Maternal and Child Health, has found that mothers who planned to breastfeed and who actually went on to breastfeed were significantly less likely to become depressed than mothers who had planned to, and who did not, breastfeed (1). This study … END_OF_DOCUMENT_TOKEN_TO_BE_REPLACED