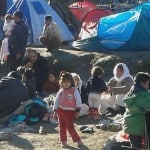 Since 2015 LLLGB has been supporting LLL Greece in their work with breastfeeding refugee mothers, and so far have raised almost £3,500 (fundraiser closed April 2016). Figures released by the United Nations High Commissioner for Refugees show that in February 2016 alone 30,5311 refugees arrived in … END_OF_DOCUMENT_TOKEN_TO_BE_REPLACED